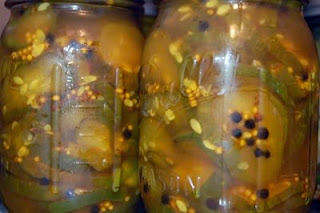 Since coming home from work, I've made blueberry syrup, a batch of chocolate-heath bar-pecan shortbread cookies (Thank You America's Test Kitchen) and 2 pizzas for dinner --- on the grill no less and am very tired.

Still so much to do while the last remnants of summer are here...

It's getting darker earlier and earlier now which makes me want to cook more - just in time for the kitchen to be torn up. Ugh.

Poured rain for over a week now - given up on keep up with total - it's been toad strangler after another. One that finished up with a nice light rain - a bird rain  - where all the birds come out and chirp. I imagine it's a nice shower for them. But it's one of my favorite things - I love rain, rainy days, going outside in the rain (as long as there is no lightening).
Posted by Jj at 18:24 No comments:

First day of true frustration with contractor - can't start anything (ANYTHING!) until cabinets arrive. ETA - end of the month. Damn it. That pushes remodel into mid November - prime cooking month  - damn it.*

*But it's a few weeks reprieve from packing up the kitchen (yeah!).
Posted by Jj at 18:00 No comments: