You've got to be kidding me... carrots! .Groan - I know that I have no recipe for preserving carrots and probably don't have anything with carrots in them - at least not in my files. It's time to get out the books - thankfully, I have several. I'm betting Oded Schwartz's Preserving will have something for me to work with. What a great book - and beautiful to look at too. I'm a big fan of chutney, so I'll likely lean in that direction. We'll see how it goes ... going to be interesting. Or maybe not so much ...
Posted by Jj at 19:58 No comments:

I remembered last night that when I was a kid I hated the sound of Masterpiece Theatre coming on - isn't it funny now - it always meant something boring.

Emma (2009) started last night and I'll have to admit, while too much dialogue had been changed and all the actors were a little fast and loose with their formalities and body language - too modern for my taste - it was charming. Not subtle by any measure, which it really should have been, but not bad, all things considering.

I don't like the choice for Frank Churchill - not handsome enough by halfs and not that charming either - perhaps he will get better. I expected that I would not like Jonny Lee Miller as Mr. Knightley, but was surprised at how well he handled the role. I have to say, I've changed my mind about him as George Knightley.

And the charmingly dirty village of Highbury  played by Chilham, Kent

Jonny Lee Miller - nicely surprising. He has my permission to continue in the role.

And my most surprising plus ... Tamsin Greig as Miss Bates. Silly, lovely, and sad ... just played perfectly. I can't believe I like her, because I can barely tolerate her otherwise - even in the book. 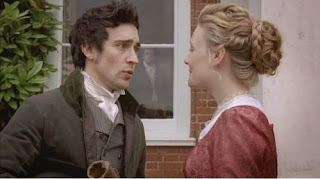 Mr. Elton - Blake Ritson - he's too obvious. It's like he's making Emma for dummies. See, I have a crush on Emma. meh                       Mr. Woodhouse - Michael Gabmon - too winey. Somehow the combination of his age (not old looking enough) and the over exageration of the I mean really, again are we trying to dumb this down for someone? blech

Frank Churchill - Rupert Evans - no where near cute enough ... so. unfortunate.

Who was this dumbed down for? Certainly not for those of us who like Jane Austen. So much of her dialogue has been removed that it's more like the idea of Emma, but not Emma. This is not my favorite book by Miss Austen. It swaps place with Northanger Abbey and ocasionally even Mansfield Park for bottom of the list, often holding the position the most when I'm actually reading the book, but this is like a shade of Emma, and not the real thing - too bad. Sometimes too much tinkering can produce a weaker product.


Let us hope for better things....