Synopsis: When Anne reaches her 25th birthday, her family declares her to be a spinster and barely worthy of notice. But Anne decides to take her life in a different direction, and she begins the first day of the rest of her unmarried life by becoming a long-distance runner. This alteration changes everything about her, and a new, supremely confident, Anne emerges. This evolved Anne has an impact on her sisters, father, and most importantly, on Captain Wentworth who has returned after eight years to find that he is as much in love with Miss Anne Elliot as he ever was.

However, there is a complication. The heir to Kellynch, the Elliot estate, William Elliot, has also come back into the picture after being estranged from Anne’s father, Sir Walter Elliot, Baronet, and he has set his sights on Anne. Now living in Bath, Anne senses that something is not right, and with the help of a street urchin named Swoosh, she sets out to discover William Elliot’s true nature.

Comments: I really enjoyed this book. Persuasion is my favorite book by Miss Austen, but this takes the tale further, while retaining the character the original and includes many subtle bits of humor. From the beginning Anne takes advantage of the fact that no one really ever notices her at home and decides that she's responsible for her own life. Does she stop loving Wentworth? Of course not, I would have put the book down in a heartbeat, but she becomes her own person without regard to what her friends or family think and she does one important thing - she says what she's (and what I'm, at least) thinking.
To her sister Mary, who thinks herself always miserable or misused after agreeing to watch little Charles so Mary can go to dinner at the Musgroves, Anne states, "Yes, I want you to go, but in return, you must stop pretending  to be ill when you are not. You have become a hypochondriac. You act as if you are unwell so Charles will pay attention to you. But it has the reverse effect, and he ends up spending even more time away from you, and you really must try to be more positive." Good advice and Mary needed the kick in the ass - glad Anne finally said it because I'm sure I think it every time I get to that part of the story.
She's not as shy of Wentworth when they first met again and he sooner realizes what he's been missing. Perhaps I like that so much because it means less pain for Anne and makes Wentworth look less resentful and petty. She becomes a puzzle to him, intriguing, down right confusing to him and yet that was what enticed him - at the same time he realized that the things about her he liked originally were still there.
Anne defies convention - as a runner, by going places proper ladies shouldn't go (Tough Town), associating with street urchins (who I loved), and investigating what is really going on with Mr. "Just as Creepy as Ever" Elliot.
It is at heart, a love story that ends the way you want it to end, with some nice turns  and a few surprises along the way. Let's put it this way, I read it in two days - which is unheard of for me - I had a hard time putting it down - damn good job Ms. Simonsen.
Posted by Jj at 19:38 4 comments:

I'm getting the idea that I shall keep adding to this list ad infinitum - but what the hell. I knew six  nor seven would never be enough so I'm adding to it today and can't wait to start. 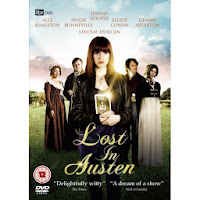 8: Lost in Austen. I've wanted to watch this for ages, but finally, it's on the way. 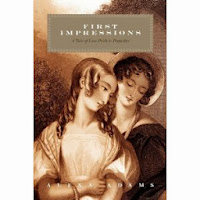 9: First Impressions: A Tale of Less Pride & Prejudice. By a talented author with a real take on Austen. I'll enjoy sharing this because I think it's just (to use that quaint work I picked up living in England), lovely. Comments forthcoming. Great job Alexa!
Posted by Jj at 20:22 1 comment: