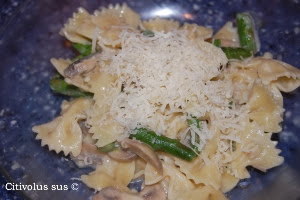 
Bring a large pot of salted water to a boil. Add the farfalle and cook until al dente, stirring occassionally, about 12 minutes. Drain, reserving 1 cup of pasta water.
Melt the butter in a heavy large skillet over medium heat. Add the mushrooms and saute until tender and mosst of the juices have evaporated, about 6 minutes. Add the asparagus and saute utnil the asparagus is crisp-tender about 5 minutes. Add the farfalle. Stir in the mascarpone and nutmeg and toss until the cheese coats the pasta, adding the reserved cooking liquid, 1/4 cup at a time to moisten. Stir in 1/2 cup of walnuts. Season the pasta to taste with salt and pepper. Mound the pasta in a large bowl. Sprinkle with the Parmesan and remaining 1/4 cup of walnuts.


Bench Notes: I've never used walnuts. Ooops. And I don't miss them. This is, without a doubt, one of my favorite pasta dishes,

Bench Notes: These are easy easy crackers to make. I do let the dough chill more than an hour - usually over night. Made this the first time in August of 2003. How old am I?
Posted by Jj at 17:22 No comments:

Crème Fraîche: "This matured, thickened cream has a slightly tangy, nutty flavor and velvety rich texture. The thickness of the creme fraiche can range from that of commercially produced sour cream to almost as solid as room-temperature margarine. In France, where creme fraiche is a specialty, the cream is unpasteurized and therefore contains bacteria necessary to thicken it naturally. In America, where all commercial cream is pasteurized, the fermenting agent necessary for creme fraiche can be obtained by adding buttermilk or sour cream. A very expensive American facsimile of creme fraiche is sold in some gourmet markets.
The expense seems frivolous, however, when it's so easy to make an equally delicious version at home. To do so, combine 1 cup whipping cream and 2 tablespoons buttermilk in a glass container. Cover and let stand at room temperature (about 70 degrees F) from 8 to 24 hours, or until very thick. Stir well before covering and refrigerate up to 10 days. Creme fraiche is the ideal addition for sauces or soups because it can be boiled without curdling. It's delicious spooned over fresh fruit or other desserts such as warm cobbler or puddings."
source: The New Food Lover's Companion, 3rd Edition, Sharon Tyler Herbst, 2001


I read this "recipe" at Accidental Epicurean last week and thought since I'm making asparagus soup this week that some crème fraîche would be good to go with it. It's also ridiculously expensive in the markets. This is just stupidly easy and I had what I needed so I thought let's give it a go. Mix on cup of heavy cream with one tablespoon of buttermilk and let sit until thickened (twelve to twenty-four hours). Stir, refrigerate. Keeps for seven to ten days.
Not terribly exciting, but at least it's easy. I expect I'll be doing this on a regular basis from now on. Now on to the challenge of yogurt, or maybe even Greek-style yogurt. 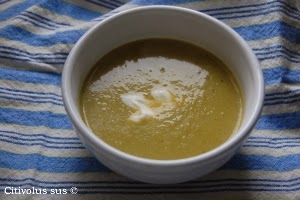 
Cut tips from 12 asparagus
1 1/2 inches from top and halve tips lengthwise if thick. Reserve for garnish. Cut stalks and all remaining asparagus into 1/2-inch pieces.
Cook onion in 2 tablespoons butter in a 4-quart heavy pot over moderately low heat, stirring, until softened. Add asparagus pieces and salt and pepper to taste, then cook, stirring, 5 minutes. Add 5 cups broth and simmer, covered, until asparagus is very tender, 15 to 20 minutes.
While soup simmers, cook reserved asparagus tips in boiling salted water until just tender, 3 to 4 minutes, then drain. Purée soup in batches in a blender until smooth, transferring to a bowl (use caution when blending hot liquids), and return to pan. Stir in crème fraîche, then add more broth to thin soup to desired consistency. Season with salt and pepper. Bring soup to a boil and whisk in remaining tablespoon butter. Add lemon juice and garnish with asparagus tips.

Bench Notes: I didn't do the garnish thing - I know, I probably should have but I didn't. I did use home made crème fraîche - which was so easy and fun to make and super tasty as well. I also added a dallop to the soup bowl.  Yum.
Posted by Jj at 18:22 No comments:

Taken by the Cowboy - Julianne MacLean

Summary: Former bounty hunter, expert gunslinger, and the toughest sheriff Dodge City has ever known, Truman Wade is a real man from the tip of his black Stetson right down to his spurs and leather boots. He's never met his match in a gunfight, but he's never met a gorgeous, gutsy woman from the twenty-first century either…
Newly single after a rocky breakup with her self-absorbed fiancé, newspaper columnist Jessica Delaney crashes her car in a lightning storm and soon finds herself dodging bullets in the Wild West. Before the night is out, she's tossed in jail for a murder she didn't commit, and if things don't seem complicated enough, the impossibly handsome sheriff in charge of her arrest has danger written all over him - and a sexy swagger to die for. Jessica knows she needs to get home, but when Sheriff Wade's enticing touch sets her passions on fire, she begins to wonder if fate has other plans for her, and soon she must choose between the life she longs for in the future… and the greatest love she's ever known. (source: Amazon)


Comments: Time travel, we all know it can't happen, but we like to suspend reality now and then. This is certainly an interesting take on it, in that while you travel time, you stay, roughly, in the same place. So you have your juxtaposition of a modern girl in the 1880s and how she must adjust just about everything to fit in in her new society - liking the changes or not. Jessica is out of her element, but is thankfully befriended by the town's attorney - he has a secret that helps him to understand Jessica's situation.
Truman Wade is the strong, silent type, who eventually comes to realize that Jessica might be what he wants, but does she want him or her old life back.
One of the funny lines in the book was Jessica's thought that maybe Dodge was purgatory or hell..."But why the Wild West of all places? If God really wanted to punish her, He could have put her on The Bachelor." I would have to agree that reality TV certainly must be a ring in hell.
When Jessica is accused through the salacious paper of the town, there is total mob mentality in the town. Not a very complimentary portrait of people of this era - were they all really stupid in 1880s? I'd hope not.
The ending was a bit of a twist, even though I had an idea something strange would happen, the ending was different and enjoyable. 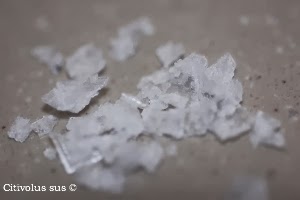 So where does my new salt come from?
Maldon is on the east coast of Essex where salt has been harvested for hundreds of years. Salt was being produced from the Iron Age to the Saxon times. The original harvesters, it is believed, placed vessels
in the river bank to trap the sea water at high tide and they were left to partially evaporate and then on to clay pots which were heated to complete the evaporation process leaving behind only the salt. In the middle ages, production became more sophisticated by placing the brine in lead pans to increase the speed of evaporation during boiling.
The Guild of Saltmakers dates back to 1394. In the 19th century in Essex the industry started to decline due to taxes and easier methods of production in Cheshire. Only a single company carries on the tradition - The Maldon Crystal Salt Company.
Why Essex - environmentally, there is low rainfall in this area - with less fresh water the salt concentration is higher than other areas. With the rise and fall of the tides, the sun and wind ease evaporation and leave behind salt deposits.

Salt - Is it the only rock we eat?

Making your own - thanks to 101 Cookbooks
I have never even thought of doing something like this before, but as I was making chicken salad recently, I remembered reading this post from 101 Cookbooks and thought, let's see what happens. I used the leaves from one bunch of celery, I rarely use the leaves anyway, and placed them on a single layer of a baking sheet and baked them at 350 degrees as suggested by 101 Cookbooks and at the suggested time of five to seven minutes. That wasn't long enough for some leaves, so I took off the ones that were dehydrated, tossing a couple that had gone brown. I put the less dehydrated leaves back in the over for another five minutes and let them cool. I thought for sure they would be dehydrated, but I didn't want them to go to brown because that would ruin the whole thing.
But... they still weren't dehydrated.
So what to do - I took the leaves that were still too soft to crumble and put them in the microwave for 10 seconds at a time on high until they were. I think next time I'll do all of it this way and see how that works. So I'm all ready with the celery leaves and then I realize
- I don't have the type of salt recommended. Here's what 101 Cookbooks says "I've made celery salt with a number of different types of salt, and the flaky, whispers of Maldon sea salt is my current favorite. The shards are similar in size to the crumbled celery leaves which works nicely." That made good sense to me but only had a small sample of Maldon, not nearly enough to mix with my celery leaves.
So to the interWeb I go and find a great salt resource, SaltWorks out of Woodinville Washington. Lovely company with a great number of salts and free shipping. And the best price for Maldon I could find. So I waited and in due time, it arrived and I finished my celery salt. I'm pleased with it and plan to use it to rim a glass for Bloody Marys over the weekend.* Yum.

*It's pretty bad when you're planning your weekend drinking on a Monday. Sigh.
Posted by Jj at 18:22 No comments: