There were only three real contenders I found after reviewing my books. 1) Pickled Asparagus (p. 75 - Putting Up, Stephen Palmer Dowdney) to which I would need to add herbs - not a big challenge there. 2) Apple Jelly with Lemon and Sage (p. 22 - Preserves, Lindy Wildsmith). The only jelly I've ever made is hot pepper jelly and it's pretty forgiving -hope this is too. 3) Rosemary and Red Wine Jelly (p. 56 - Well Preserved, Mary Ann Dragan) seems interesting, but also a little strange.
And then I remembered that I had copied out a bunch of recipes from library books last year. Can o'worms. So then added 4) Herb Jelly with Variations, 5) Herb Wine Jelly, and 6) Herbed Asparagus (Ellie Topp, Complete Book of Small Batch Preserving) to the list of contenders.

So I stopped thinking about it and ordered a jelly bag, extra bags, kitchen twine in a cute stainless holder, and some very pretty Leifheit jars.
Posted by Jj at 19:03 No comments:

Received Cook's Country recently - can't wait for show to come back on, but it's the damn pledge week -

I don't have a recipe per se for pasta sauce - which I call spaghetti sauce, but I use for all kinds of things. This is something I make w/out using a recipe and change every time I make but only slightly. This is also sneaky - a way to get a few extra veggies in when no one is paying attention. This is weekend thing so I don't have to cook at least one night a week  and is easy to double and freezes like a very cold dream.

Onions - how ever much you want - for a double recipe - I use at least 1 1/2 large onions, but maybe more or less and type doesn't matter too much (yellow, white, red, whatever)
Carrots - grated on a box grater - sneaky vegetable - usually about 4 ish but could be more or less depending on size and how many are in the fridge

Saute onions - I start them first w/olive oil and get them going while grating carrots. Add carrots (all extras peels from onions, carrots and mushrooms, etc. go to compost bin). Saute until they start to soften. In the mean time (what does that mean really?)...slice mushrooms - sneaky vegetable #2 and add to mixture - let cook until the mushrooms dry out a bit (takes a little while, suck it up and deal). Now the fun starts.
Add:
handful of dried oregano, handful of dried basil, garlic (how ever much you like) and cook until fragrant - you'll know. And then ... the wine. Add red wine - now -- right when the pot starts to dry out, turn up the temp a bit and then hit it w/some much needed alcohol. I use red wine - typically Merlot since that's what I like and let is simmer until almost gone - Those handy dandy little single serving bottles work well in this application. I suppose you could do without, but why the hell would you?
Then and only then do you add the tomatoes. And again - whatever you have - I've used whole, diced, crushed - 2 large cans.. doesn't really matter they all break down in the end. Bring to boil, reduce to simmer and let it go until you're happy with it - I tend to simmer for an hour or so - turn off for an hour or two and then bring back to simmer and then store - might not matter - probably just a habit, but I don't question it.

This is a vegetarian sauce- probably because I started making it when I was a vegetarian. I have since gotten over than phase, but it did not do me any harm - I always had bread and cheese and that's all that really matters after all. You really don't even need pasta with this - just some in a bowl with grated parmesan on top and good bread for dipping - dinner.
Posted by Jj at 18:31 No comments:

This is one of my favorite meals. It's easy, quick-ish and tastes outstanding. I've learned though to make it even quicker. This is one of those recipes that calls for things I use quite often so I look at my recipes for the week and find all the common denominators for them. So this weekend (Sunday) I minced a lot of garlic, grated a bunch of Parmesan and spun up some bread crumbs in the food pross monster. It's amazing to me how a little advanced prep saves so much time later in the week. I love to cook for my family - it's fun (most of the time) not a chore, but when you come home from work - already tired and not really up to doing much more it's great to have something mostly ready to go. I'm ready to make it again right now.


Here's the recipe: Baked Chicken with Parmesan and Garlic Crust
If you can't access it - it's worth signing up - I'm not kidding. Just do it.


Comments from the Counter:

It only takes two slices of bread to make the breadcrumbs - don't use the cardboard they sell at the store - ugh.
I don't use the basil, but I do modify the mayo by adding either lemon juice or lemon juice and zest (depending on how ambitious I am)
Either thin cut chicken breasts or pound out regular ones to make them thin-ish.
Coat the 9 x 13" pan w/cooking spray to make sure nothing sticks.
Always check the temperature - 160 degrees minimum.
Very good leftover too.
Posted by Jj at 18:53 No comments: 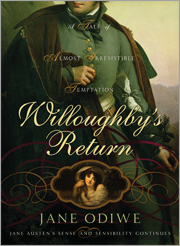 My thoughts: I enjoyed this book. I'm a skeptic in general of fan fiction - this is probably only the 3rd or 4th fan fic I've read, but I think this could be the best type. True to the character but developing new ideas and new story lines. Sense and Sensibility is a good story, not my favorite book by Miss Austen, but an interesting story about two opposite sisters, but there are parts that can be rather tedious [Elinor - tell Lucy Steele that she's a conniving hateful creature and you have her game all figured out]. Willoughby's Return makes good use of Marianne - she's still a little emotional (read: jealous), impetuous, easily swayed by what she feels - she's Marianne. But Elinor - she's such a buzz kill. In S&S I like Elinor and to give credit she's a very minor character in WR, but famously dull and judgemental - glad she's just a minor character.
Margaret becomes a real character in this story, and is, perhaps, a blend of both of the best parts of Elinor and Marianne - spirited, but knowing, not so trusting as to be blind, but easily (perhaps too easily) falling in love. It's interesting to see Colonel Brandon (wish Jane had given him a first name) be something a little more three dimensional, but still absent. And Brandon's other family, that's an interesting project, isn't it? Not a good situation. I can totally understand Marianne - why she feels that way - I'm a jealous type too and and could NEVER share my husband with anyone ever. Jealousy is not a good quality, but what can you do? It's not rational, but then again, it wouldn't be, now would it?
All that said, the ending was nice but maybe a little to 21st century. Would Eliza talk to Brandon in such a personal way? Would Brandon apologize to Marianne for neglecting her? I'm thinking not so much. Margaret's story works better for me - it's believable though a bit transparent - but nice nonetheless - lovely lovely story.
What does one think about John Willoughby? Yes, he really loved Marianne. But not enough. Do you feel bad for him? Maybe like Elinor does when he explains why he married someone other than Marianne ... but to me he's an even bigger tool because he married a woman he didn't love - just for the money... weak.
Posted by Jj at 11:32 No comments: