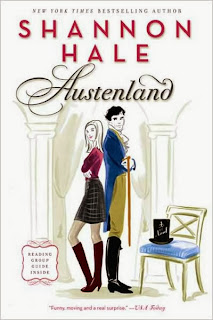 Summary: Jane Hayes is a seemingly normal young New Yorker, but she has a secret. Her obsession with Mr. Darcy, as played by Colin Firth in the BBC adaptation of Pride and Prejudice, is ruining her love life: no real man can compare. But when a wealthy relative bequeaths her a trip to an English resort catering to Austen-crazed women, Jane’s fantasies of meeting the perfect Regency-era gentleman suddenly become realer than she ever could have imagined.

Decked out in empire-waist gowns, Jane struggles to master Regency etiquette and flirts with gardeners and gentlemen—or maybe even, she suspects, with the actors who are playing them. It’s all a game, Jane knows. And yet the longer she stays, the more her insecurities seem to fall away, and the more she wonders: Is she about to kick the Austen obsession for good, or could all her dreams actually culminate in a Mr. Darcy of her own?
Comment: I had heard of this book before, but the premiss seemed a bit far fetched (where did that phrase come from?). Who would want to spend real time in Regency England? I like reading about it - at least Miss Austen's version of it, but I sure the heck wouldn't want to live it. Plus just the stigma of being lame enough to go to Austenland? I'm just not there. That said, I enjoyed the book. It was quirky and fun and had all the important parts necessary; scheming mother, brooding handsome stranger, competitive women, plus a normal nice guy.  While the premiss did seem a bit out there, it's written in a believable manner so I got over that part. Jane  - let's see - she's a strange girl, but in the best possible way - I liked her.
Further Comment: In looking for a picture of the book cover, I have just discovered what, I'm sure, the rest of the Jane Austen world knows - that this is being made into a movie - and even better JJ Feild will be in it.  Ah, Mr. Tilney.
Posted by Jj at 16:22 No comments: 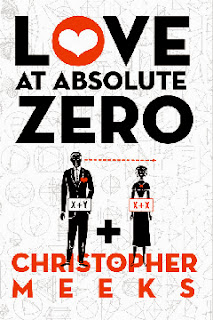 Summary: Gunnar Gunderson is a physicist who teaches at University of Wisconsin who work relates to getting to absolute zero - it's his holy grail. As he earns tenure, he decides he needs to take control of his person life -  which means finding a wife in three days. That's all the time he can spare away from his research.


Comments: There was just something so hopeless naive about Gunnar that I had to read the book. It's not just romance, it's not all science, but it certainly is about life and how we, mostly, stumble our way through it. I could say more on this, but I don't want to give up too much of the story. It is a bit of an unusual pick for me, but I really enjoyed it. Gunnar is dense, brilliant, goofy and hopeless all at the same time - that why you need to read the book.
Posted by Jj at 16:22 1 comment: